Nashville-based Bakers Square Restaurants announced on Saturday that it had closed without warning all but one of its south suburban locations from Merrillville in northwest Indiana to Orland Park in southwest Cook County.

The action leaves a Bakers Square still operating at 15711 S. Harlem Ave. in Orland Park in the south suburbs and one at 1675 U.S. Highway 41 in Schererville in northwest Indiana. The next closest locations still open are at 942 S. LaGrange Road in LaGrange, one in Woodridge and another in Bourbonnais-Bradley. 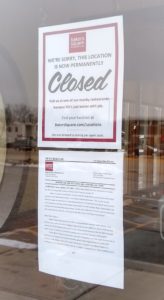 A news release taped to the front doors of the closed location in Orland Park states, “After very careful consideration, we have made the tough but necessary decision to discontinue operations at the Orland Park location. This is never an easy decision to make and one driven by many business factors.” The same message was taped to all of the other locations with the name of that location changed in the release.

One of those factors apparently was the filing on Monday for Chapter 11 federal bankruptcy protection by American Blue Ribbon Holdings, the corporate parent of Bakers Square and Village Inn restaurants.

In the filing, the company said it closed 33 locations over the weekend citing high wages, growing competition, declining sales and higher operating costs. American Blue Ribbon has $14 million in unsecured claims, including unpaid rent and litigation claims, according to the filing.

A press release on Monday said American Blue Ribbon filed for bankruptcy to restructure under “a healthy core of restaurants.” The company said it was exploring “a variety of strategic and structural alternatives to best position the company for success in the future.”

The company said pies represent 30% of Bakers Square’s sales. They were also known for giving away pie slices on Wednesdays.

B-Sides Coffee & Tea, which opened at 9907 S. Walden Pkwy. in October 2017, closed its door on Friday as owners Kevin and Karen O’Malley have relocated from Chicago’s Beverly community to her hometown of Indianapolis.

The couple named the business after the B-side of records and because it was located next to the Beverly Metra stop.

The couple has been managing the business from Indianapolis but said it was too much for them.

They are among 100 stores the company said it would close by the end of 2022.

Express said it will also close another 35 stores by the end of January 2021 and the remaining locations by 2022. An additional nine stores had already closed in 2019.

The move to close stores is part of the company’s new corporate strategy, which focuses on customer engagement. The retailer is also looking to relaunch its loyalty program and private label credit cards by this fall.

Thirty-eight corporate-owned locations were closed over the weekend due to “accelerating” sales declines. The chain, which had grown to 134 locations in 26 states, cites recent expansion, an “inconsistent brand experience” and decreased traffic to shopping malls as leading to the declines, according to the filing Monday in a Delaware bankruptcy court.

While the Bar Louie inside the Holiday Inn at Interstate 57 and U.S. 30 in Matteson survived the purge, locations at 22 E. Chicago Ave. in Naperville and 335 N. Dearborn St. in Chicago both closed over the weekend.

Rosemont-based Wintrust Financial Corp. last week announced that the company’s board of directors approved a quarterly cash dividend of 28 cents per share of outstanding common stock.

The dividend is payable on Feb. 20 to shareholders of record as of Feb. 6. This represents an increase of approximately 12% from the 25 cents quarterly cash dividend paid in each of the quarters of 2019.

Additionally, the company’s board of directors approved quarterly cash dividends on outstanding shares of the company’s 6.50% Fixed-to-Floating Non-Cumulative Perpetual Preferred Stock, Series D. The dividend is payable on April 15 to shareholders of record as of April 1. 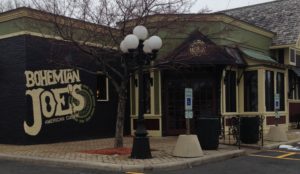